One of the main private electric power transmission concessionaires in Brazil, ISA CTEEP is present in 17 Brazilian states, transmitting around 60% of the energy consumed in the Southeast region and 93% of the energy of the State of São Paulo through the National Interconnected System (SIN) ) - the country's electricity production and transmission system.

SIN is considered unique worldwide for its size and characteristics of electricity generation and transmission: a large system, with high prevalence of hydroelectric plants (about 70%) and is formed by companies from the South, Southeast, Midwest, Northeast and part of the Northern Region.

Recognized for excellence of service delivery, ISA CTEEP adopts an operational strategy based on ongoing value creation. For this, the Company bases its actions on three pillars:

Since its inception, the Company has invested around R$ 10 billion in the expansion of the system (considering values ​​already realized and committed). Another important milestone is the extension of its main concession agreement for another 30 years, signed in 2012. The relevance of its operations makes its assets an indispensable source for the energy network in the State of São Paulo. With the use of regional interconnections, ISA CTEEP transmits almosto 100% of the energy produced in the State.

For ISA CTEEP, the quality of the supply of energy transmission to the customer is a permanent commitment that drives its operational efficiency strategy.

ISA CTEEP adopts guidelines of the normative standard ABNT NBR ISO 9001: 2008 in all its processes of Operation, Maintenance and Projects (Enterprises). In 2016, the company maintained the ISO 9001: 2008 certification recommendation, after conducting third party audits in these processes.

The process of certification by this standard began in 1998 in the processes of the Real Time (Operation) area, extending to other processes and areas as of 1999. Thus, ISA CTEEP evidences its commitment to provide energy transmission services with excellence and quality, meeting the guidelines of its corporate services policy.

ISA CTEEP adopts guidelines of the normative standard ABNT NBR ISO 14001: 2004 in the processes related to the operation and maintenance of substations. In 2016, the company maintained the ISO 14001: 2004 certification recommendation, after performing third party audits in these processes, which totaled 66 substations and two transmission lines.

In 2001, ISA CTEEP prepared two substations for the ISO 14001 certification, SE Santa Bárbara D`Oeste (Regional Cabreúva) and SE Xavantes (Regional São Paulo), succeeding in the recommendation of this standard. Since 2002 other substations have been prepared and incorporated into the audit process.

This standard allows ISA CTEEP to manage the environmental aspects and impacts of its substations, as well as to ensure the monitoring and compliance with all environmental legislation in force in the country.

The electrical system of ISA CTEEP and its eight subsidiaries and associated companies comprises a network of 18,642 km of transmission lines. It is this network that enables the transport of energy from the points of connection with the companies that generate power and of interconnections with other companies transmitting energy to the grid of utility companies, responsible for bringing electricity to the final point of consumption. Learn how energy comes to your home.

Learn how energy comes to your home

Part of the transmission lines is aerial, i.e. running in outdoor installations, and is made up of long metal cables, supported by more than 39,000 towers by means of a series of insulators and fittings. Now, the underground lines have power cables designed to run indoors and are built under the protection of ditches or tunnels.

Find below the typical silhouettes of ISA CTEEP transmission towers (metal), with their respective widths of the strip of land along the axis of the aerial line of sub-transmission and transmission. 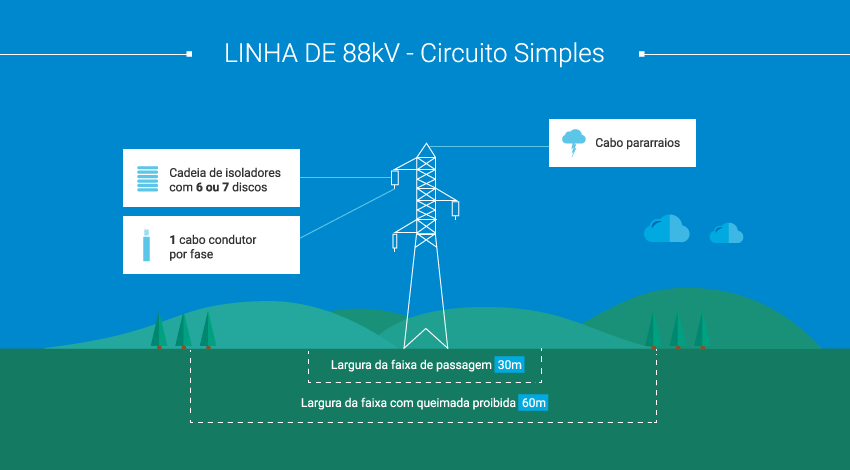 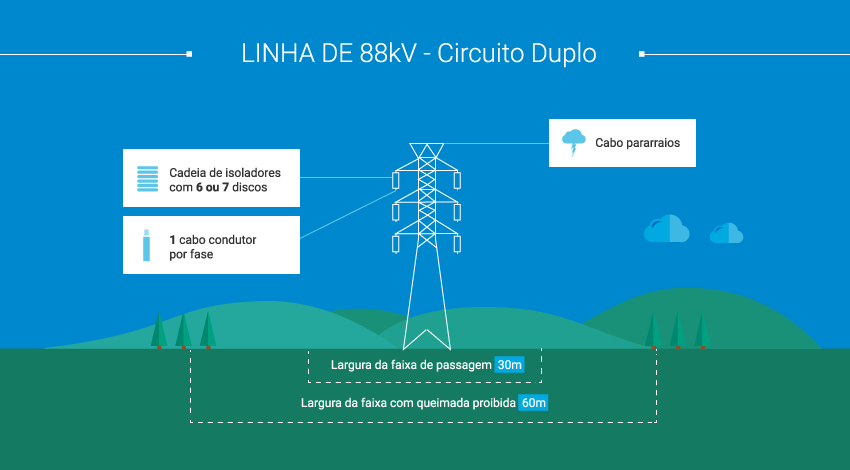 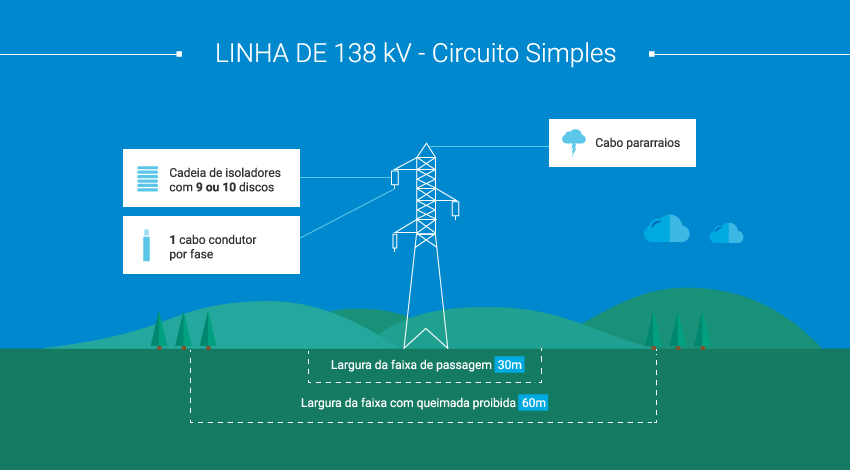 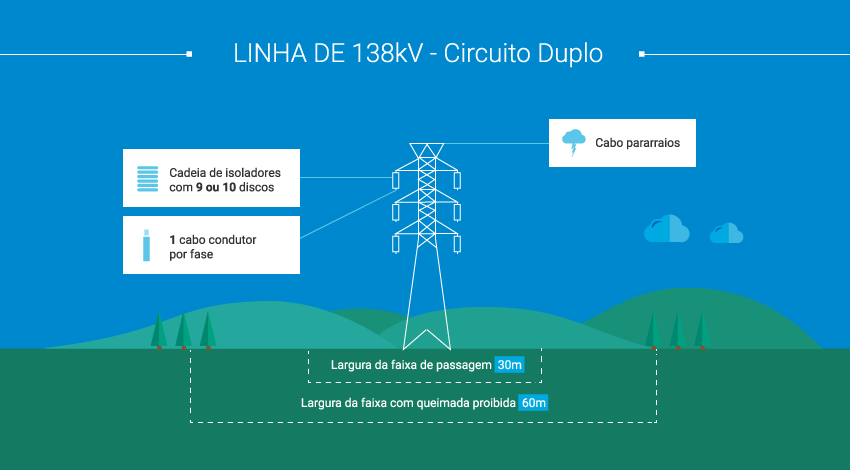 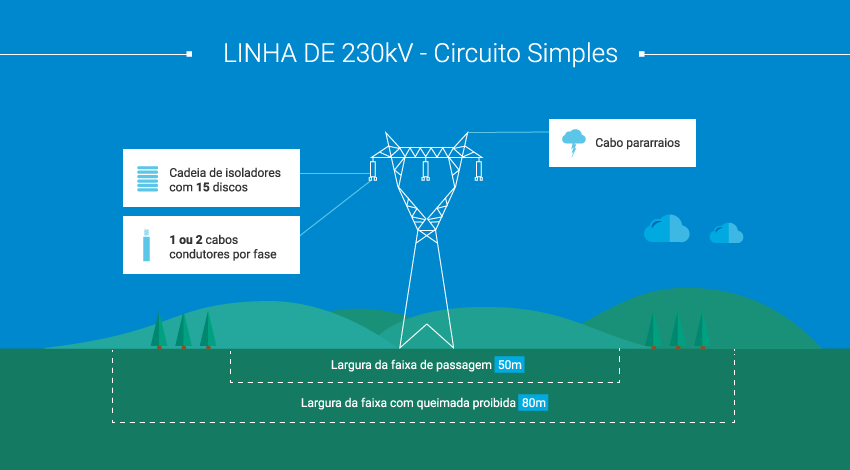 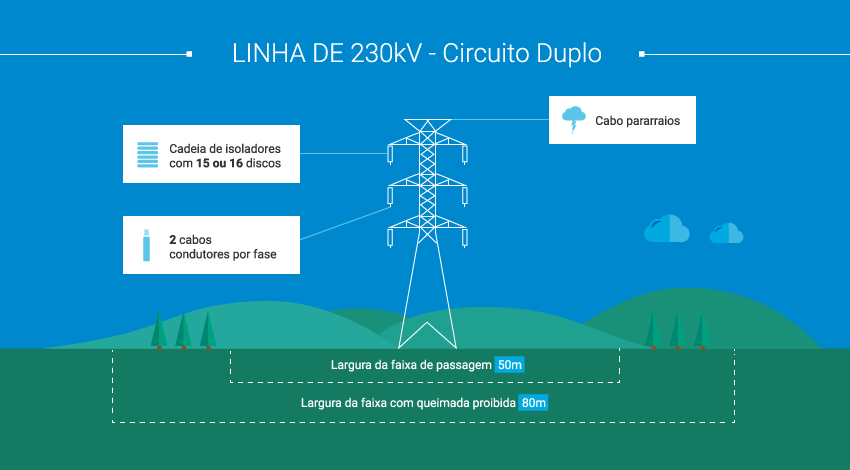 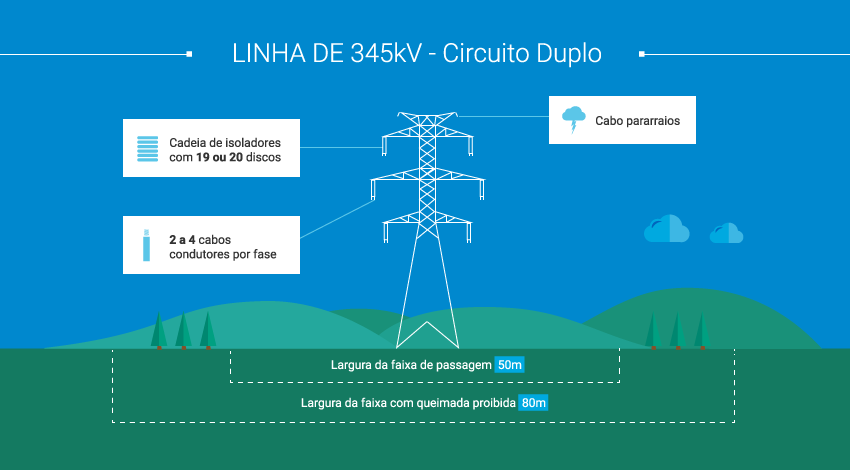 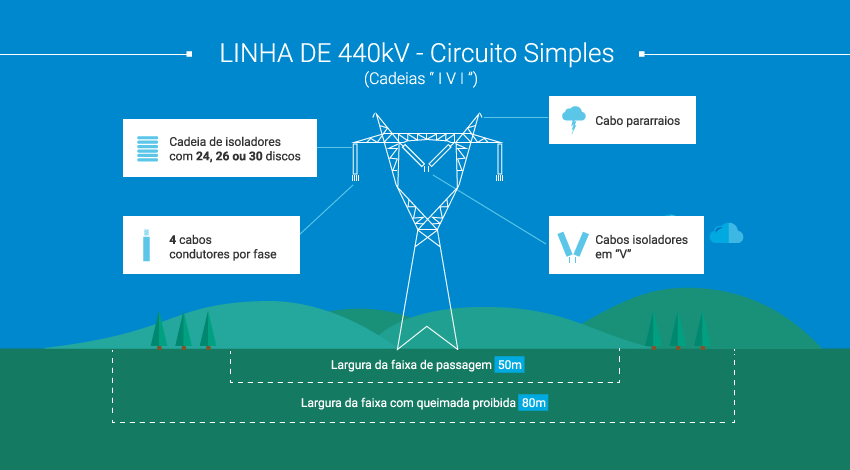 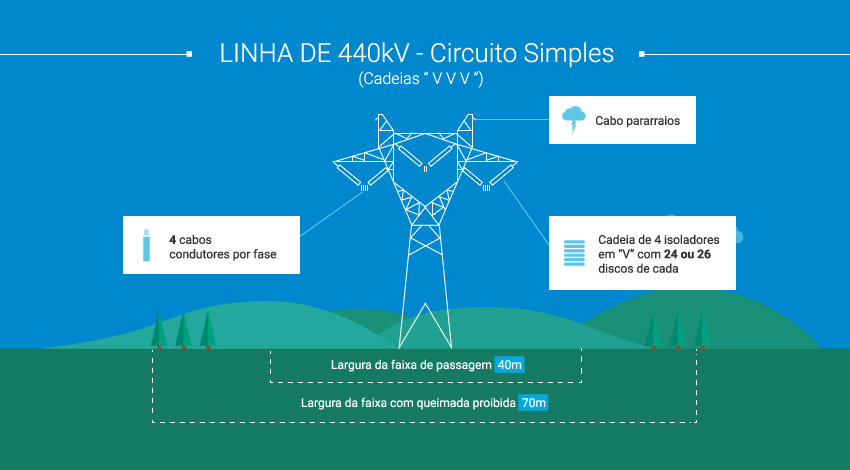 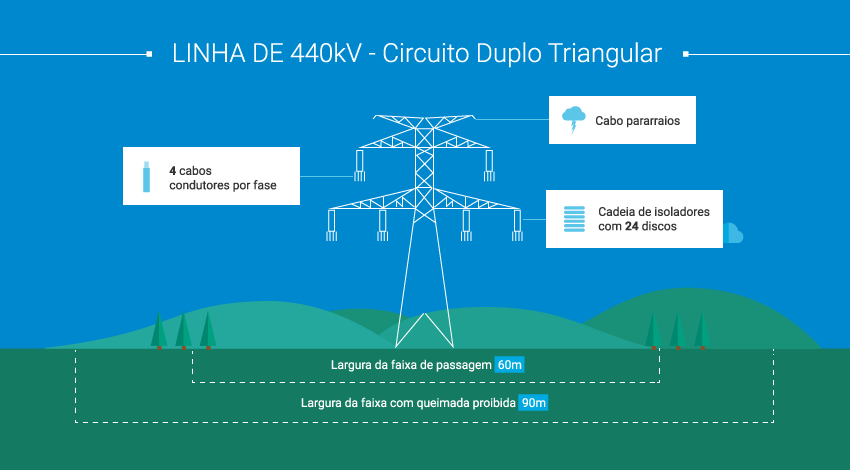 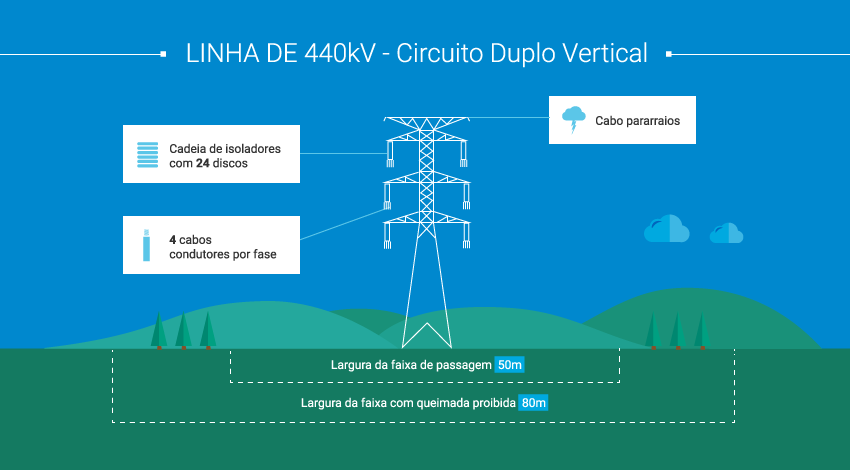 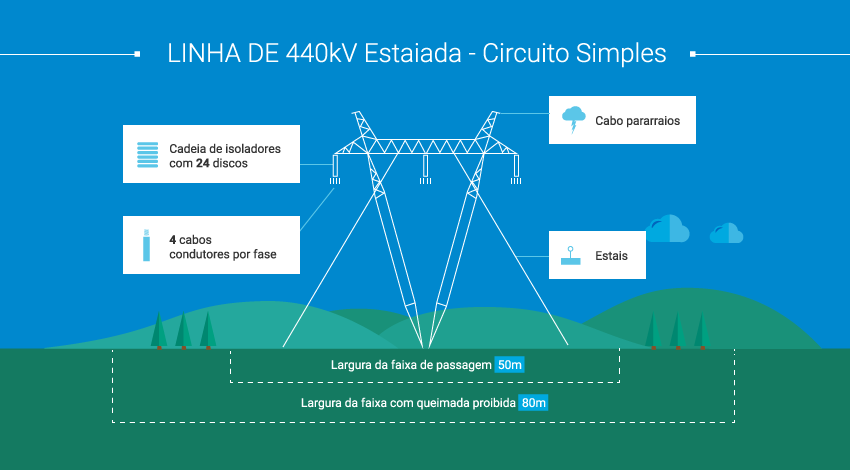 With 126 substations interconnecting its transmission system, ISA CTEEP guarantees the supply of energy throughout the State of São Paulo. The substations are responsible for connecting the transmission lines to different locations and, where necessary, increase or reduce the voltage levels of electricity.

Protection and control equipment such as lightning arresters installed on the lines and transformers to mitigate the possibility of over-voltage and switchgear for insulation, equipment maneuver and change of the substation configuration when necessary, among others are set up in a substation.

Substations are classified according to the installed power they have, constructive configuration and function in the system. They may be conventional or armored. The most common facilities are of the conventional type, in the open, using the air as an insulator between the equipment. This installation model occupies a large area of floor space and is characteristic of the substations built in the past.

Due to the growth of urban centers, substations are now designed in smaller sizes and compact formats. As an alternative to the use of air as an insulator, sulfur hexafluoride gas (SF6) started to be used, thus facilitating the implementation of the model of armored substations, with fully enclosed environment.

Operation and maintenance are the two aspects that influence the performance of a transmission line. Therefore, ISA CTEEP remains attentive to the performance of its infrastructure in order to deliver a service with high levels of quality.

To measure the performance of its operations, the Company uses indicators of the availability and interruption ratios. Thus, one can check if the operation of a transmission line is within satisfactory standards, considering the ratio uptime versus number of outages occurring per 100 kilometers of line/year.

In turn, when the parameter for performance is maintenance, the average time between failures occurred is observed, checking the availability of the equipment and the average time to perform repairs.

To analyze the quality of operation and maintenance of transmission lines, ISA CTEEP annually prepares an individual diagnosis of each line with recommendations of the services required to maintain or to improve the performance shown. The preparation of this diagnosis has a robust set of information such as the line classification according to its priority; results of air and ground inspections; services performed by the maintenance staff; situation for corrosion; among others.

Carrying out maintenance of transmission lines through inspections and statistical data can predict the exact time for interventions. For this, trained professionals, materials and equipment are allocated to meet the eventualities in a minimum time. These maintenance operations occur preferably without interruption of power supply.

In its activity of supplying energy to the Brazilian market around 138,000 GWh *, in 2017 ISA CTEEP maintained a Non-Supported Energy Index (IENS) of  0.000303% of the load served, which is considered an excellent level and demonstrates the efficiency of the Company’s energy supply. The brand reflects the Company’s commitment to maintain the rationalization and optimization of operation and maintenance processes, seeking continuous improvement of productivity and quality of work of technical teams with the adoption of cutting-edge technologies.

Another recent example of infrastructure improvement as part of the use of advanced technologies is the process of digitization of the Edgard de Souza substation (São Paulo), the company's first large installation fully digitalized according to internationally standards. It represents a further step towards the modernization of the Company's power grid, increases the reliability and maintains the level of excellence of the activities.

The coordination of the ISA CTEEP entire electrical system is performed by two of the Operation Control Centers, supported by information systems, which supervise and control the substations and power transmission lines to ensure quality services with economy, safety and efficiency.

Set up in the countryside of São Paulo - and interconnected by voice and image transmission systems, the two centers have a process of full back-up, or permanent readiness at any moment, one replacing the other if necessary - if one of the two presents an irregularity, for example. Thus, the control operation is protected from damage to the system with full reliability.

Both facilities are 100% certified by ISO 9001 and operated by a team of highly trained technical professionals, who undergo refresher courses and practical and theoretical training, also by using the Training Simulator (STO), which ensures seamless integration and upgrade with the ISA CTEEP operational guidelines and the Grid Procedures of the National Electricity Transmission System Operator (ONS).

Some initiatives are especially dedicated to ensure continued progress in the modernization of assets and technologies and ISA CTEEP controls. One of them is the use of digital simulation in real time (RTDS - Real Time Digital Simulator), positioning ISA CTEEP in a small group of companies capable of performing simulations with milliseconds detailing, enabling a thorough assessment of the electricity grid and more precise and fast adjustments in the mechanisms of control and protection.